Join us (back in person!) for friendship, coffee, and great discussion 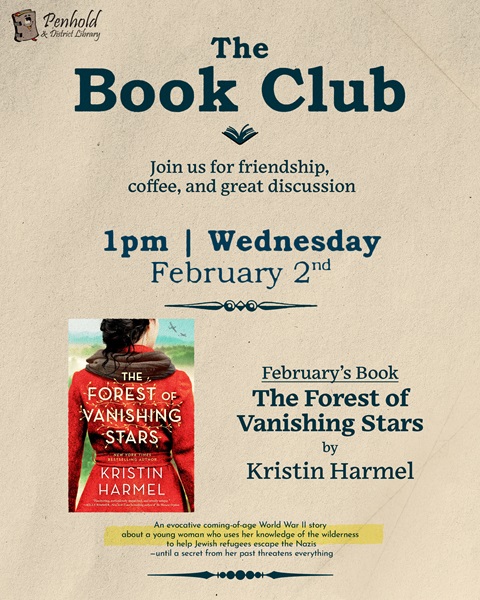 Join us on Wednesday, February 2 at 1pm at the Library as we return to in-person discussions

February's book is The Forest of Vanishing Stars by Kristin Harmel

After being stolen from her wealthy German parents and raised in the unforgiving wilderness of eastern Europe, a young woman finds herself alone in 1941 after her kidnapper dies. Her solitary existence is interrupted, however, when she happens upon a group of Jews fleeing the Nazi terror. Stunned to learn what’s happening in the outside world, she vows to teach the group all she can about surviving in the forest—and in turn, they teach her some surprising lessons about opening her heart after years of isolation. But when she is betrayed and escapes into a German-occupied village, her past and present come together in a shocking collision that could change everything.

Inspired by incredible true stories of survival against staggering odds, and suffused with the journey-from-the-wilderness elements that made Where the Crawdads Sing a worldwide phenomenon, The Forest of Vanishing Stars is a heart-wrenching and suspenseful novel from the #1 internationally bestselling author whose writing has been hailed as “sweeping and magnificent” (Fiona Davis, New York Times bestselling author), “immersive and evocative” (Publishers Weekly), and “gripping” (Tampa Bay Times).